I have heard about Organic Studio before but had never tried the ink as the fella that makes it stopped for awhile so there wasn't ink to try. Organic Studio is back now and I decided to try an ink called Foggy Bottom (yellow sepia) and huh, it looks like KWZ Honey. Are they the same? 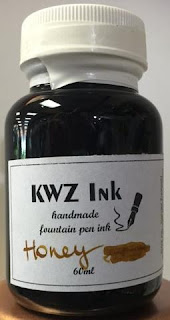 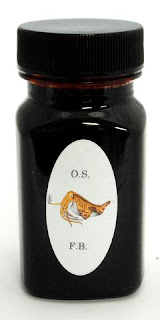 Organic Studio was founded by a Biochemistry student in 2012 and is stationed in Maryland, USA. KWZ was founded in 2012 by Konrad Żurawski, a Chemistry graduate from Poland which is also where KWZ is located.

Why do I bring all of this up? Well, both colors are really identical in color, flow, shading. It is incredible as if one copied another but which was first? Foggy Bottom was a special release for the DC Pen Supershow in 2013, according to the box. I am unsure as to when the KWZ Honey ink was made.

Look at that similarity. The swabs are a tad different but the writing is where the similarities really stand out. I really love both inks, not surprising since they seem like twins.

So which ink came first? Did KWZ copy some of the Organic Studio ink as it wasn't being made any longer? If so, are there other similar inks? Both companies offer Iron Gall based inks as well although Organic Studios only has one that I know of. I am not accusing anyone here, not at all. Just asking a question and typing out loud.

After a prolonged use of both inks, Foggy Bottom has major flow issues for me and it doesn't seem to matter which pen I load it into. Hard starts and drying out where as KWZ Honey has had none of these performance issues. I find that interesting.

There is a pen store here in the metro area that has the full line of Organic Studio inks as he loves them and did before they stopped production. There are some other colors I want to try from this brand and also to compare to the KWZ inks I already have. Will I find any other "duplicates"? Stay tuned!

This post is based off of my experience and opinion. I do not represent either KWZ nor Organic Studio and I am not being paid by either company either.
Posted by Analogexpressions at 8:44 PM