2018 seems to be the year of Olivine and olive green colors. The 2018 Pelikan Edelstein Ink of the Year is Olivine and Monteverde has a gemstone collection with Olivine. Faber Castell recently unveiled new colors and guess what? Olive green is one of them. I, myself, am very excited as green is my favorite color so lets see what is happening. 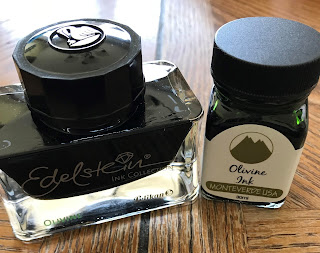 Olivine is one of the most common minerals on earth and is most known as a major rock forming mineral. Olivine can appear in color as olive green, light-green, dark-green, yellow-green and brown. As a gemstone, it is known as Peridot. 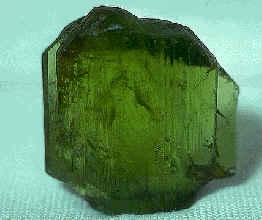 I was very anxious to try both Olivine inks together and compare the two. What I found was two very different offerings of Olivine. 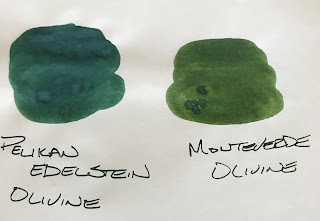 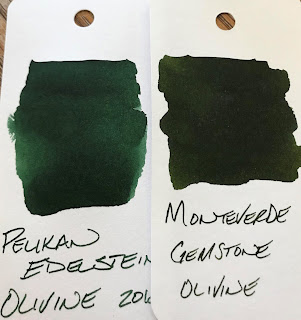 Both inks behave very well. Both have a nice flow, have nice saturation and shade wonderfully. It really boils down to what color you prefer and what you may have been expecting. I was expecting an olive green color, as that is what I identify Olivine to be. Monteverde hits that color out of the park, in my opinion. 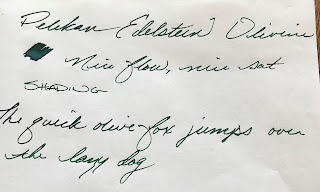 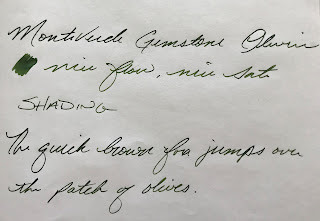 Everyone has their own opinions and that is great. Mine is that Olivine is an olive green based color and not a blue-green color. Monteverde Olivine wins this by a landslide when comparing Olivine properties. Pelikan Edelstein Olivine is a lovely ink and I like it, it is just not a solid Olivine to me. 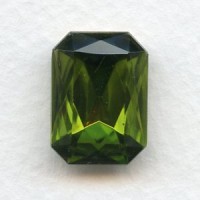 This review is based off of my opinions and experience. I do not represent either Monteverde nor Pelikan and I am not being compensated in any way.
Posted by Analogexpressions at 1:41 PM 5 comments:

I learned a very important piece of information about myself this past week. Ink + Space Theme + Historical Tie-In + Limited Edition = I must buy it. Ever since I was a kid, I have been in love with outer space and planets. If you are a regular blog follower here, then you know I love historical significance and stories behind my ink. Well, let's see what makes this Limited Edition set for Voyager 1 so special. 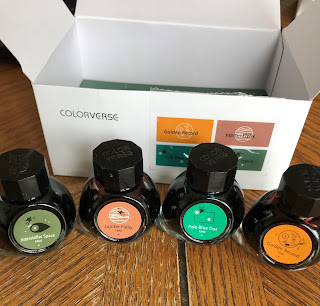 We should start with a touch of history here. Voyager 1 is a space probe that was launched September 5, 1977 and it is still on it's mission today. Voyager 1 had a historic flyby of Jupiter and it took some great photos that allowed us our first glimpse of this giant up close. These inks have a magnificent tie in to this entire mission. It starts with the packaging. 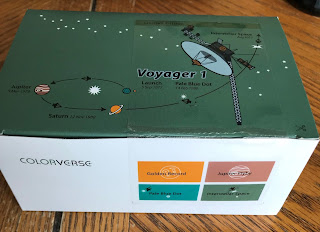 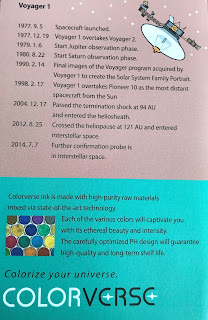 This Limited Edition set is limited to only 1,977 pieces. See the tie in to the launch in 1977? Each set comes with a numbered card to let the owner know what numbered set they now possess. Mine is #1,250 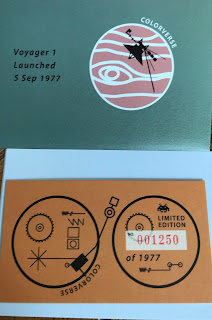 The set comes in 4 different colors and the bottles are small 15mL bottles. I like the looks of the bottles but as far as function goes, filling from them is a pain. I was forced to either use an ink syringe of place the converter in the bottle to fill all by itself. It is a small nuisance.

Let's look at the colors and what makes them special.

Aboard the Voyager is a phonograph record, a 12" gold-plated copper disk containing sounds and images selected to portray the diversity of life and culture on Earth. It has images, music, sounds and greetings. Think of it as a time capsule for extra-terrestrial life. The color of the ink is a copper based hue.
It is very similar to Diamine Ancient Copper 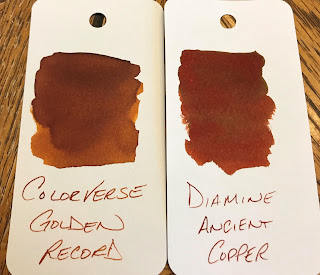 Voyager 1 had some amazing photos of Jupiter taken and gave scientists a great "look" at the planet to further learn more of this giant of a planet and it's moons. Jupiter is well-known for being the "banded" planet and this brown color is very representative of the bands seen on Jupiter.

This color is very similar to Platinum Classic Sepia-Black 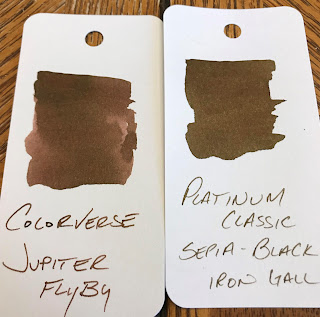 The Pale Blue Dot is Earth. On Valentine's Day in 1990, Voyager 1 turned around and took a photo of Earth. This was not part of the planned mission but Carl Sagan had the idea of pointing the spacecraft back toward its home for one last look. In the photo, Earth is close to the size of a pixel and is within a sunbeam that is reflected by the camera. Why is this significant? It reminds us that Earth is merely a spec in the grander scheme of things. At least that is my opinion.

The color is more of a teal towards the green side 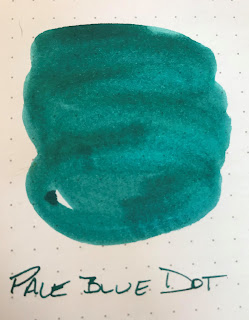 The color is very similar to Monteverde California Teal 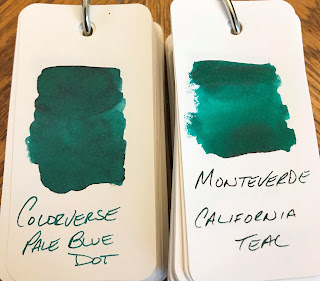 This is where Voyager 1 is at now. This is the space between solar systems so it is officially no longer in our solar system. The color itself is a lovely shade of green. I would think that Interstellar Space would be black but I love the color green. so I am good with it. 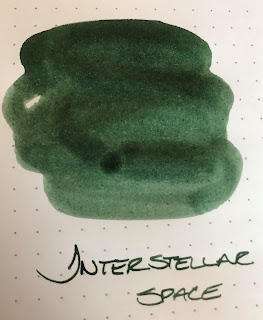 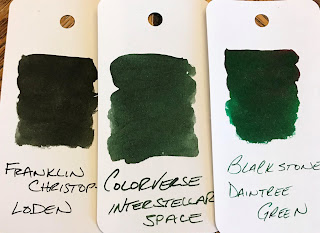 What I also really like here, is that the package comes with a little booklet with the ink colors and it has the RGB codes as well as the Hex codes to recreate these colors digitally. 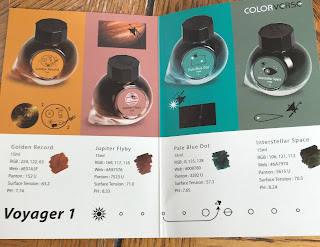 It is a nice touch and these colors are all throughout the physical packaging.

I like the set. It is Limited Edition with a specific number of units and then they are gone. It is $50 USD which isn't terrible but it is super fun for ink lovers and space lovers alike.

This review is based off of my experience and opinion. I am not representing Colorverse Ink nor am I being compensated in any way.
Posted by Analogexpressions at 8:36 AM 3 comments: