When this ink came out, I was intrigued by it as every photo of it looked different. Was it really a grey or a brown? It is a rather unique color, in my opinion and I purchased a bottle at the Chicago Pen Show. 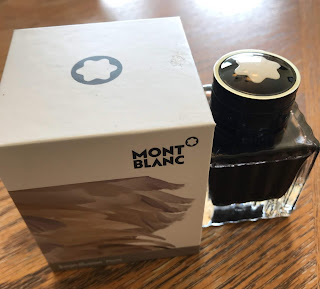 These special edition inks from Montblanc are a tad pricey but I got a great deal on this one. Once I purchased it, I filled my Diplomat Aero with it and it was gorgeous. I do have a love of grey colored inks but this one isn't a static grey.

When I was doing my ink swabs, I looked at the napkin I was using and wow, for a grey ink, look at this. 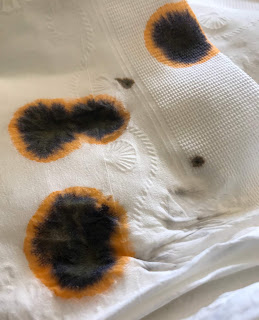 The chromatography shows brown, green, purple and orange. It is quite beautiful. The ink itself tends to lean grey but has tones of brown and red and green in it, all at the same time.


It shades quite nicely, has a saturation that Montblanc is known for and flows well. It is also well behaved on various papers tested. What I did find interesting was how the color varies on different paper types.


I showed the ink to a friend of mine and they said it looks similar to an ink they had. Kyo-Iro Stone Road to Gion and they are super similar.

Stone Road to Gion has much of the same properties as Swan Illusion Plume but possesses more brown.

I really like this ink and the properties it has. It is normally listed at $43 in the U.S. but I was able to get it for $30.

This review is based off of my experiences and opinion. I do not represent Montblanc and I am not being compensated in any way.
Posted by Analogexpressions at 4:00 PM No comments:

Yafa Brands were kind enough to send me a Monteverde Monza fountain pen along with a 30mL bottle of Monteverde Canyon Rust ink to review. I promised to provide a fair review. 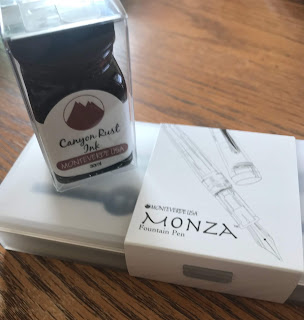 i am going to start with the ink first. This is a nice reddish-brown ink with nice flow, great saturation, nice shading and is very well behaved on different papers.

As far as comparisons go, this ink is fairly similar to some other ink colors . 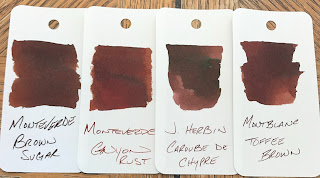 Montblanc Toffee Brown is still my go to brown ink color but Canyon Rust is a nice fill in and has an amazing value at $8 for 30mL. 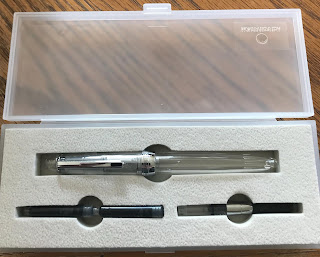 Now the Monza fountain pen, however, was a disappointment. The pen itself is a nice starter-based pen which is valued between $16 - $20. When I opened the box and took the pen in hand, it felt light and the plastic feels like plastic. The pen itself reminded me of something but I had some trouble deciding what it was. Then it hit me, this looks, feels and writes just like a Jinhao 992.

This is a 992 fountain pen but the feed is clear and the cap band is branded with Monteverde. 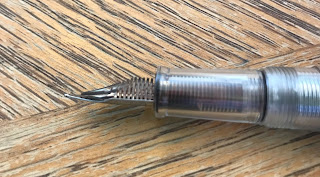 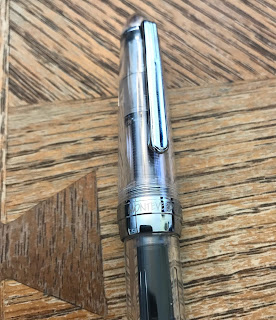 The pen has a #5 sized nib that writes very smooth and I am forced to post the pen, due to the size of my hands. I do not like to post my pens so keep this in mind if you are like me. This pen requires posting if you have larger hands.

I am disappointed that the Monza is a re-branded Jinhao 992 but it is what it is. The Jinhao 992 is valued anywhere between $2 and $8, depending on where you look to shop. The Monza is more than that price, obviously, but depending on what you are looking for, this pen could be for you. The Monteverde Monza seems to be more readily available for purchase here in the U.S. than the 992 and that could factor in to the decision as well. 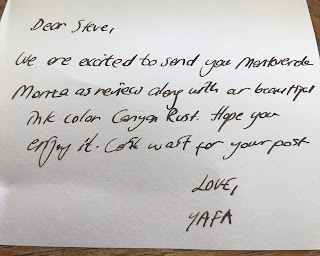 Yafa Brands was very generous in sending this box of goodies to me for the sake of a fair review and even sent a nice note. Thank you Yafa Brands and Bob the cat loved the box a little too much. 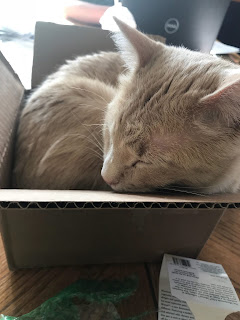 I do not represent Yafa Brands nor Monteverde. I am not being compensated by anyone for this review.
Posted by Analogexpressions at 3:18 PM 1 comment:

Last year I made a journey to the Dallas Pen Show and had a great time. This year I decided to attend a show a little closer to home and a 4.5 hour drive seemed more appealing than an 11 hour one, quite frankly.

The Chicago Pen show is much larger than the Dallas show. I arrived Thursday night so i could be there bright and early on Friday. The show opens to the public on Friday at noon but if you purchase a weekend pass, you can get in at 8am. Wait...I can get 4 whole hours before the general public? sold.

I spent that time browsing all of the vendors and looking to see what i would be interested in. I had a budget, of course, and did not want to spend beyond my means. So many lovely items on display but the first purchase was ink. Papier Plume made the trek from Louisiana and had two show exclusive colors. Da Blue and Bootlegger's Sacrament. 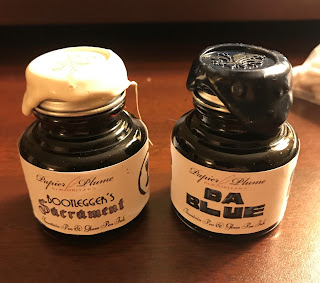 One of the best parts of a pen show is meeting people and the pen community is one of the nicest around. I was able to meet Mandy from Franklin-Christoph with whom I had emailed many times. I had a lovely discussion with Lisa Anderson about pen shows from the patron point of view. Shawn Newton and Liz were there and so was Leigh Reyes. Ralph Reyes was also there with his amazing nib creations and Lisa Vanness was nearby. Love her Hi Y'all greeting. 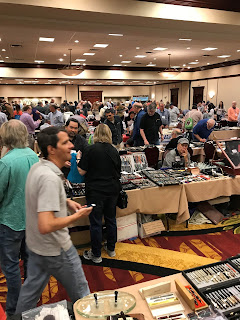 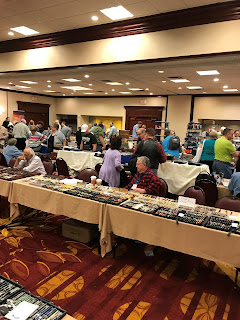 I also was able to meet some pen pals and people who follow my Instagram page. I met some new friends and made some great connections. One of which was one of the show's organizers, Laura. Laura is a kindred spirit in the art of sarcasm. We hit it off and are now planning on sending each others ink samples of our favorite inks.

Along with the great people here, some wonderful deals can be found. I found one of my grail pens and I could afford it so after some deliberation, i pulled the trigger on a Sailor King of Pen in ebonite. Oh man does it write like an effortless dream. 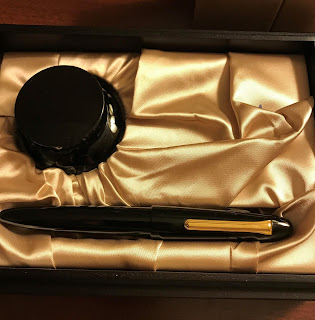 I ended up spending all day Friday and Saturday at the show with a great pen mixer Saturday night which was sponsored by Vanness Pens and the Chicago Pen Show. There was even an appearance by an 8 foot long, 30 pound gummi snake. The things that can be purchased on Amazon. 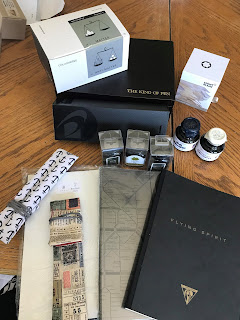 I had a great time at the show and will go again next year. Here is what the haul consisted of:

I recommend attending a pen show at some point if you have not ever been. Great people, great pens and great stories.
Posted by Analogexpressions at 8:24 AM No comments: