Robert Oster is a ink maker in Australia that really made a splash in the ink scene with Fire and Ice. I have seen the reviews and I wanted to try this ink myself so I received a sample and tried it out. My findings seem to differ from the majority of the internet. 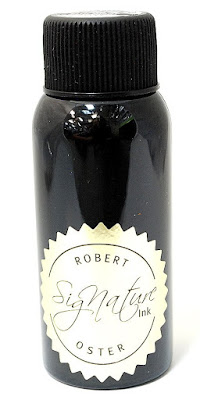 The special property of this ink and the reason for the name here is the red sheen that is to appear during normal writing. The main ink color is a Cerulean blue color which is more of a teal that is bluer than green. Sheen happens in highly saturated inks as not all of the dye can be absorbed by the paper so as it dries on top of itself, a different color is usually seen. This is sheen. 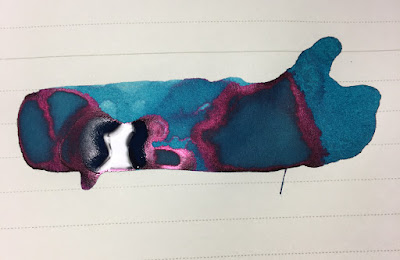 This is Fire and Ice with the red sheen visable. This took some big drops to make it appear. I originally tried this ink with my Edison Collier with a M nib and no sheen was evident. Now, I have read some internet reviews that achieved some sheen with a F nib but I decided to try it in a Twsbi Diamond 580 with a 1.5mm nib. 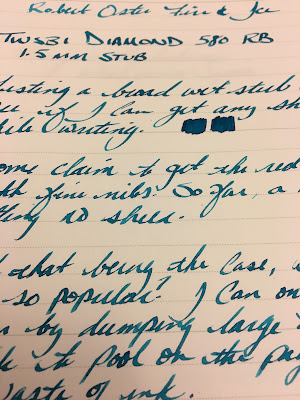 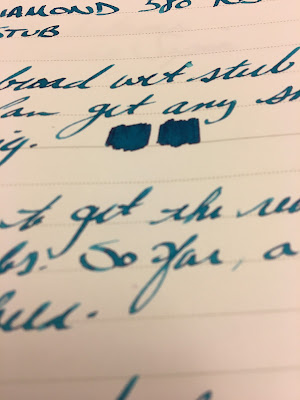 This did not achieve any sheen. This is a very wet nib and the paper here is Mnemosyne. Well, maybe the paper is the issue. 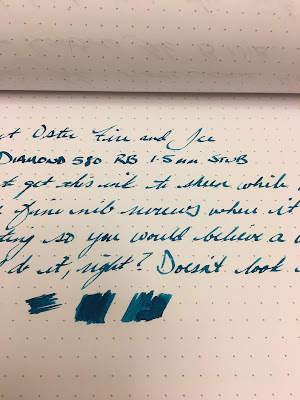 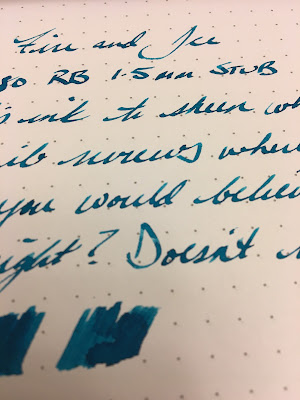 Nope, Rhodia didn't help either which was unsettling. Well, what should I try next? Oh, I know what to try. Voodoo paper which you know as Tomoe River. 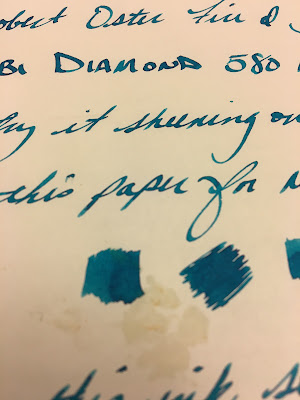 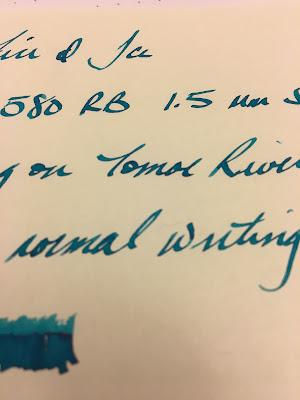 Seriously? No sheen here either. What does a pen geek need to do in order to see some fire in their ice? The only other thing I can think of is this was a sample and perhaps a bottle would provide better results.

I do like the ink. It is a Cerulean blue, as I mentioned earlier and is quite similar to J. Herbin Emerald of Chivor, which is a teal but more green than blue. Emerald of Chivor is also supposed to have red sheen as well. I also tested this next to 2 other teals which are Pilot Iroshizuku Syo-Ro and Ku-Jaku. 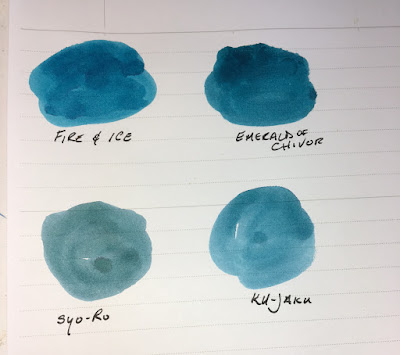 Fire and Ice is much more blue than the comparable inks here. It shades nicely and is overall a great blue ink but what about the fire? Where is the sheen? Grrrr.

This review is based off of my own opinion and experiences. I do not represent Robert Oster nor am I being compensated in any way.
Posted by Analogexpressions at 8:16 PM