I have often been perplexed by ink colors named after famous figures from history. Why is DeAtramentis Edgar Allen Poe a green color is one of those questions that gives me a headache. I could name others but it is what it is. When this Antoine de Saint-Exupéry limited edition ink was released by Montblanc, I was intrigued but all of the ink swatches online did nothing for me. A friend of mine has this ink and allowed me a sample and that is when I wanted to know more as I liked it. 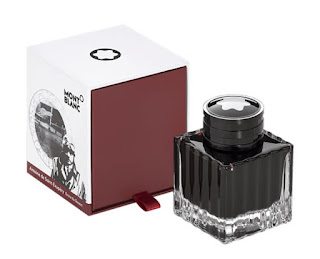 Antoine de Saint-Exupéry was a French writer and pioneering aviator. It appears he is most notably known for his novella The Little Prince. What I did not know what that Antoine was pilot, namely commercially before WWII and then was a pilot in the war flying reconnaissance missions. He flew for the French before the German armistice in 1940 and then again for the Free French Air Force in North Africa until 1944 when he was shot down around the Mediterranean.


I do love a good story when it comes to ink but how does this rich burgundy color relate to this famous person? According to Montblanc, the color is inspired by the color of the desert at sunset. Oddly Montblanc terms this color a dark saffron which is more crimson to me and this looks like a dark burgundy.

It has some sheen when there is a substantial amount of ink deposited on the paper but all in all it is a nicely saturated ink but it is not crimson. 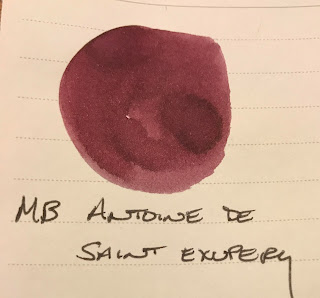 It flows nicely, as do most Montblanc inks that I have tried and it behaves well. I tried it on Midori MD paper, Clairefontaine, Rhodia, Tomoe River, Leuchtturm, Franklin-Christoph and 100g Col-O-Ring paper without bleed, feather or spread issues.

The color is similar to some other burgundy colors but definitely has more blue in it, compared to the others, for a more purple-like base. 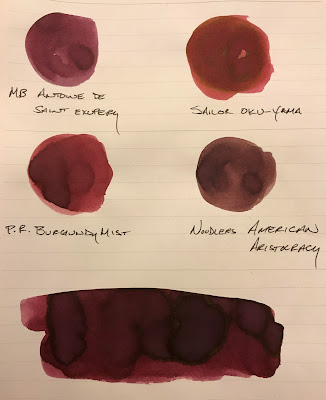 Out of these four inks, the Noodlers American Aristocracy was the closest candidate, well this bottle anyways. Sailor Oku-Yama is a beautiful burgundy but the sheen took over here.

I really love the color and I find the story behind it or more the inspiration behind it quite interesting. I believe I need to buy a bottle here as I do not have a burgundy quite like it. I may have an ink problem....but ...but...I can quit whenever I want!

This is based off of my experience and opinion. I do not represent Montblanc nor am I being compensated in any way.
Posted by Analogexpressions at 1:47 PM