My first pen show and I thoroughly enjoyed it. It can be a tad overwhelming at first as there are so many people and things to see. 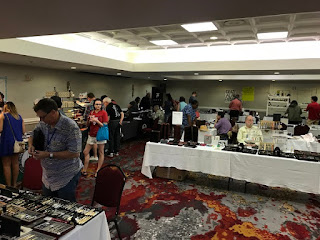 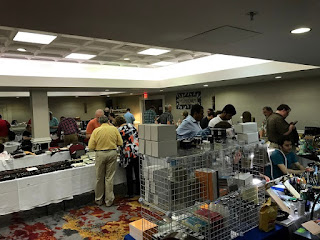 It was so much fun to meet so many people who share the same passion for pens, paper and ink.


I spent the most time and money at the Franklin Christoph table as they had all of their nib options in pens to test out and try. 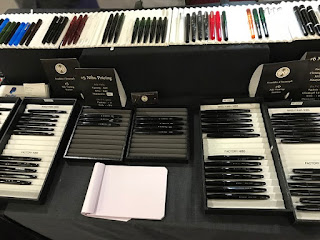 After much deliberation and testing, I chose a beautiful Model 31 with a 14k gold nib. The hands on touch here is quite nice as I then got to choose what Franklin Christoph ink I wanted it filled with and then Jim would personally tune the nib before handing it to me. 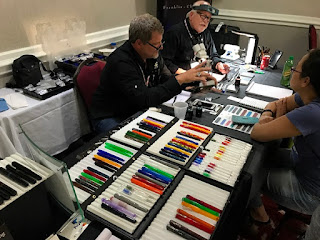 The nib felt butter smooth and the ink is quite lovely. I went with Black Forest which is a dark green that still has beautiful shading.

I then went to Vanness Pens because of their vast ink selection and are the only vendor I know of in the US that carries KWZ ink. 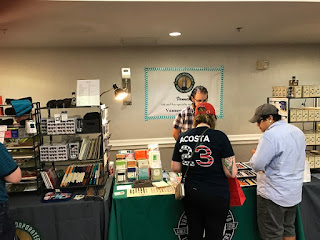 By this time, I was pretty beat and the show was to be ending and we hadn't had dinner yet.

Day 2 of the show started at 10am and I was down shortly thereafter. I checked out the silent auction pieces, which were plenty and consisted mainly of vintage pens and some books.

I then was able to meet Papier Plume and browse their wares. 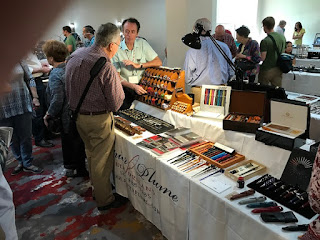 I have bottles of Sazerac and Red Beans & Rice already but what else do we have? I ended up having a nice discussion about ink here and purchased some stationary and ink for my mother as a thank you for staying home with my kids.

Next happened to be a visit to Anderson Pens. 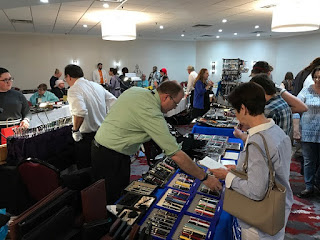 Brian and Lisa Anderson are very nice people. Lisa and I spoke about the Midwest as they are in Wisconsin and I tried out some Sailor pens. I really like the look of the Pro Gear over the 1911 model but man are they small pens. I have big hands and I do not like to post my pens.

Dromgooles and Chatterly Luxury were there and I visited their tables but their offerings were a bit past my allotted budget. We had some great pen discussion and all is good.

I also visited Luxury Brand to see the new Noodler Ink inks but that was a disappointment. Polar Purple and a blue were not what I was hoping for and I didn't stay here very long. I was hoping for a new and exciting ink offering.

Pendemonium has Iowa roots from Fort Madison, Iowa which is also the former home of Sheaffer pens. 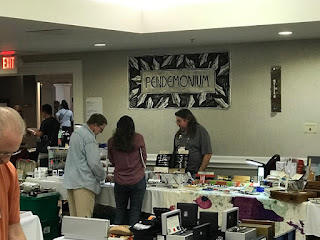 Sam and Frank are super knowledgeable and quite friendly. It was nice to touch base with them and reminisce a bit.

I will definitely come to this show again. I met some great people and was really in pen heaven. With some restraint, I may be able to buy some more pens but can I save during the year with all of the other great pen things out there? We will see what happens. Thanks Dallas, it was super fun!
Posted by Analogexpressions at 4:55 PM