Some people know this story but I figured it could potentially be entertaining to others on how durable are the lava rock Visconti Homosapiens really.

I have two of these particular pens. I have a maxi Bronze Age and a midi Steel Age. The Steel Age had an accident due to my lack of focus and having an "oh look, shiny!" moment.

I was going about my typical morning routine before heading to work and I placed my Traveler's Notebook on the trunk lid of my car. All of my other items made it safely within the car but not the notebook with my Steel Age attached. I proceed to back out of the driveway, drive to my favorite coffee shop and then head to the office. After rescuing my coffee from its pot at the store, I realized that my notebook and pen were not in the seat next to me as they should be. Panic set in and I started to freak out a bit. I immediately then saw me placing the pen and book on the trunk and saw the folly I had performed. I started to drive back the path I had driven earlier and then I saw it in the middle of a small intersection. 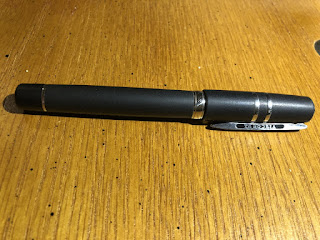 I quickly saw the notebook and then I saw the pen. It was obviously driven over by a vehicle as it sat neglected in the street. To my amazement, the clip is the only thing that saw any damage. It is scratched up and dinged a bit but mostly it is flat rather than the curved clip they are known for. 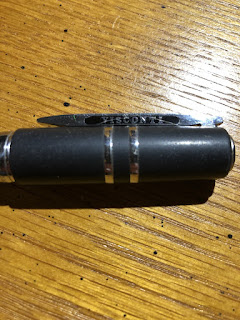 The pen is otherwise completely intact and free from damage. That is simply incredible. I understand that the material is a lava rock based resin from Mt. Etna but to have a vehicle run it over and the clip is the only damaged item on a pen is wondrous. I even rather like the clip straight rather than curved. 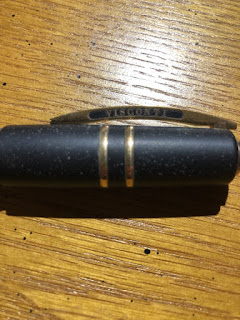 That is my story. The pen still writes wonderfully and is now rather unique in the pen world. I am not condoning people to go out and run over their own lava Visconti's, mind you. Just know that this pen can really handle what you throw at it and is truly rock solid.
Posted by Analogexpressions at 11:42 AM