The 24th Annual Ohio Pen Show was this past weekend (Nov 1 - 4) and it was the first time I had attended this show as it is a 10 hour drive for me. I decided to suck it up and make the show this year and I was not disappointed. If you have never attended a pen show before, here are some reasons to go.

You can try products before you buy them to make sure it is really what you are wanting, since that cannot be done online. You can interact with the vendors and most importantly, the pen community itself. I believe the people you meet at a show are the best part of a pen show. The pen community is truly amazing.


I arrived at the hotel on Thursday night, November 1, and it was late. I immediately ran into Ralph Reyes and he gave me a hug as he remembered me from the Chicago show. I found some dinner and called it a day.


Friday was when the show opened to the public and I was excited. What would I find that needed to be brought home? Who would I see? Who would I meet?

I met a pen pal in person and it made my day. It is always nice to put a face with a name. Thanks Amy! I then made the rounds and immediately found my first purchase of the day as the deal was too good to pass on. I found a Pelikan M815 LE Metal Stripe at a phenomenal price. Bam! mine! 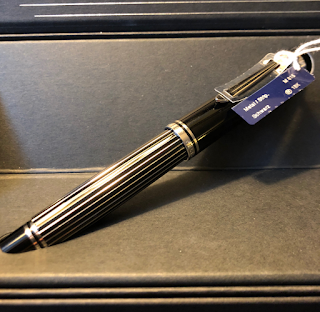 Anderson Pens is always a stop for me as they have a great selection and Lisa Anderson cracks me up. Brian is nice too but Lisa is a riot and so fun to be around. Here I fell victim to the Anderson's selection and bought the new Esterbrook Estie.

After some lunch, I made it to the large ballroom and began browsing. So much selection here and many familiar faces. I was able to meet @Allthehobbies and @Penguintreats as well as Richard Binder. Jerry with Laban, The legendary Wahl-nut and many others. Here I purchased a Laban pen that really caught my eye and had to pull the trigger. I actually didn't make any other purchases this day. After the show, there was a pizza party and I was able to meet some members of the Ohio Pen Club and made some new friends.

Saturday started with a bang! I had been pondering this purchase all evening and decided to pull the trigger. I went up to Syd Saperstein, The Wahl-Nut, and purchased the Wahl Eversharp Decoband with the Gatsby design. My mother was a skilled quilter and all of her designs were so symmetrical and geometric that the pen reminded me of her.

Then I ran into Ryan Krusac's table and had to buy another scrimshaw pen. This one is a Legend 15 with a Dragon etched onto the moose antler barrel. His skills are truly amazing and he makes such a quality product. I was also able to meet Jake Weidemann and see their artist proof for their pen collaboration. It is stunning.

Well, what do pens need? Yep, ink. So after some pondering and browsing I purchased some ink from Anderson Pens, Lemur Ink, Papier Plume and Opus. My wallet was on fire at this point. 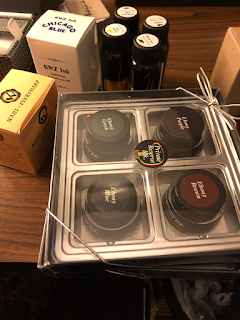 At 12:30p, we had a meet-up in the lobby for members of a facebook pen pal group to meet. Several showed up and we went to a local deli and had a lunch filled with stories, laughs and of course, pen fondling.


The days were packed with activity and everyone was just so friendly and energetic. I had a great time but sadly had to make the 10 hour journey back home on Sunday so i wasn't out too late.

I loved the Ohio Pen Show and I believe I will go again next year.
Posted by Analogexpressions at 9:09 AM